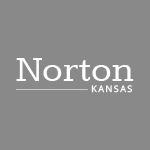 The City of Norton was incorporated in 1872 and is a growing, progressive community located in Northwest Kansas with a population of 2,841. It is the county seat of Norton County, which has a population of 5,550. (Population certified to the Secretary of State by the Division of the Budget on July 1, 2016.)

The City of Norton is a City of the Second Class, and operates under a Mayor-Council form of City Government. The Governing Body is composed of the Mayor and six council members elected from three districts or wards.